Before we went to Vietnam, we were talking with a friend about things to do and places to go. He gave us two great suggestions - spend more time than we had planned in Hoi An, and explore the caves north of Huế. Advice number one was a winner, so we quickly looked to investigate advice number two.

North-central Vietnam has some of the largest and longest caves in this part of the world. In fact, near to the caves that we visited (Paradise Cave and Phong Nha Cave) is the newly discovered Son Doong Cave, now listed as the world's largest. Unfortunately for us, the Son Doong Cave isn't open to the public until next month, and even then, will cost a lot more to explore than we're comfortable paying.

What we experienced was the best caving adventure of our lives.

Although we could have done this as a day trip out of Hue, we decided to take the train up to Dong Hoi and use that as our base. Since we were already heading north to Hanoi, this made sense, as it would shave a couple of hours off of our overnight train journey the next day.

We made reservations at the Nam Long Hotel, which turned out to be reasonably nice - they had a family room that we took, with one large bed and two bunks for the kids. Since we got there early evening, and had an early departure to the caves the next day, we didn't get a lot of chance to explore the town.

Although we already had made arrangements while in Hoi An for a guide and driver to take us from Dong Hoi to Phong Nha, the hotel has a good array of tour services available for the caves - everything from full-on tour services down to just hiring a driver or renting a motorbike to go yourself (I would recommend a driver though - it's not that easy to find, and driving yourself in Vietnam is taking your life in your hands...) Note: if you want to go for the more adventurous cave exploration of Paradise Cave (where you go 3.5km into the caves instead of the normal 1.5km), you might want to look at booking this through the Phong Nha Farmstay - they have the ability to book the longer tour. We all agree that next time, we will do this one!

When we got to Paradise Cave, we paid our entrance fee (140,000VND per person, about $6.70). We were told that kids under 12 were half price, but apparently they have since moved to a "pay-by-height" model, where anyone over 130cm pays full price. Although Alex and Leah both tried to shrink, they ended up being charged as adults...

We then started a 1.5km walk to the entrance of the cave (although we could have sprung another 200,000VND for a "buggie" to drive us there - but the walk was nice). The last section to the cave (that everyone needs to walk) is 524 stairs up the hill - good way to work up a sweat! 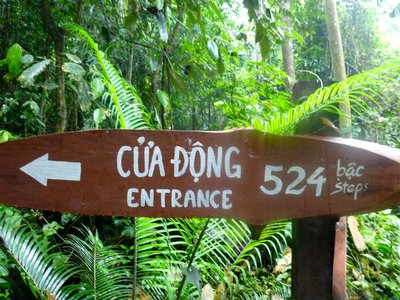 Once at the top, we took a breather and had a bit of water while we looked at the map: 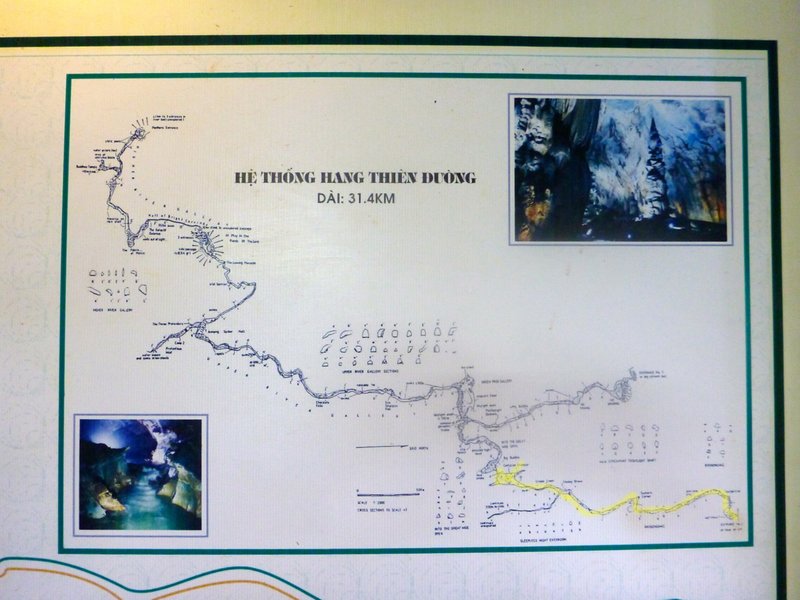 The yellow highlight shows where we went in, and how far we were able to go.

Walking down into the cave was a magical experience. You can feel it getting cooler (and of course, much darker), and then, when your eyes start to get used to the light, you realize that THIS PLACE IS HUGE! We had been in caves on Easter Island and in New Zealand, but this was the largest cave than any of us had experienced. 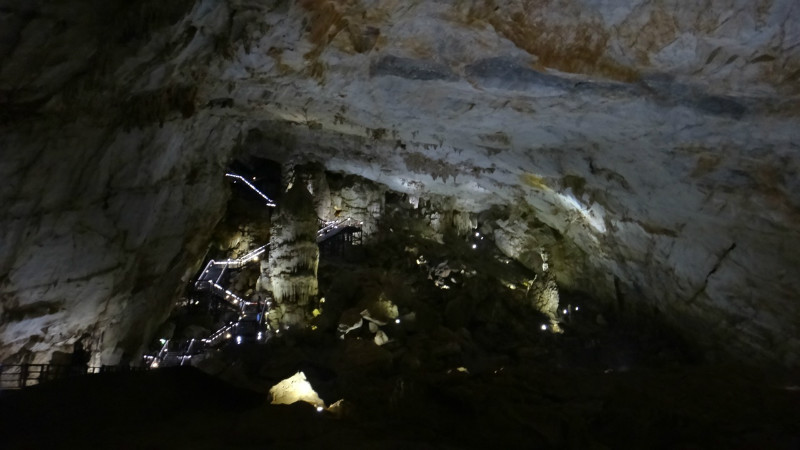 Here's a view from inside of the cave, looking back at the stairs coming down from the entrance

It's very easy to get around inside the cave - you're walking on a well-maintained wooden walkway, and there are lights all over illuminating the cave. Some people on teh internets said that they didn't like the lights (too colorful), but we didn't find them distracting at all.

Here you can see the walkway through the caves - it went on and on... 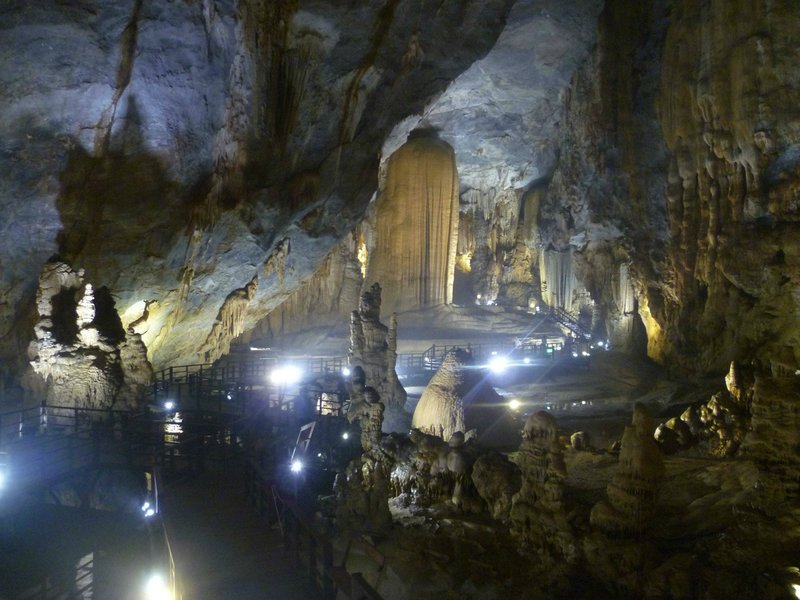 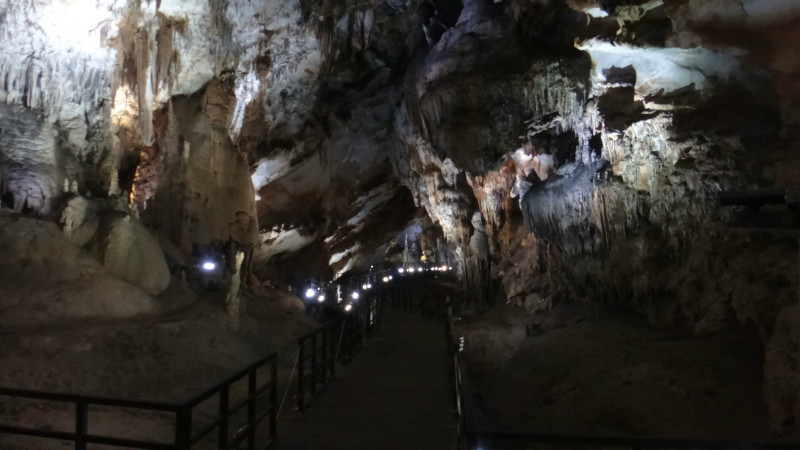 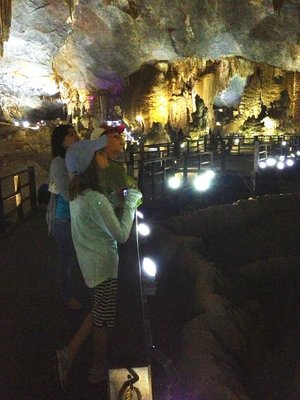 The rock formations (stalagtites from the top, and stalagmites from the bottom) were huge and varied. There were so many different types of formations, we just wandered around in awe. 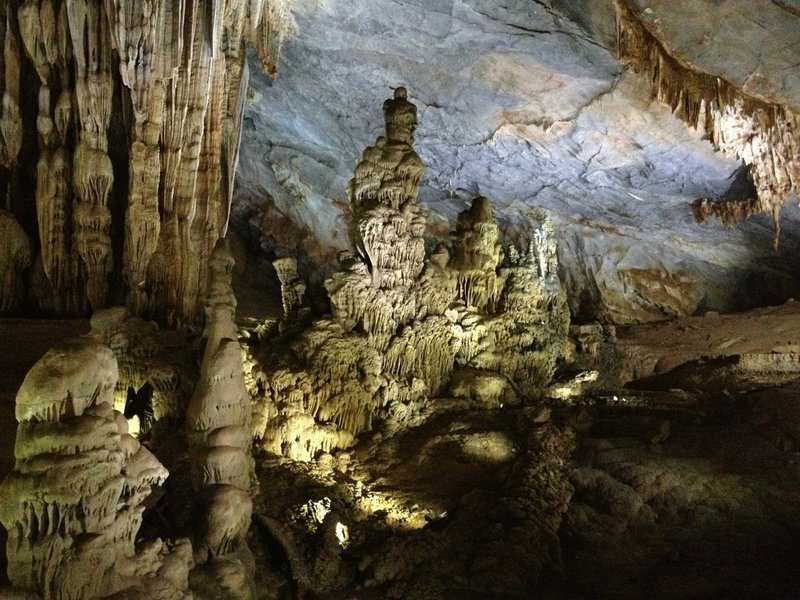 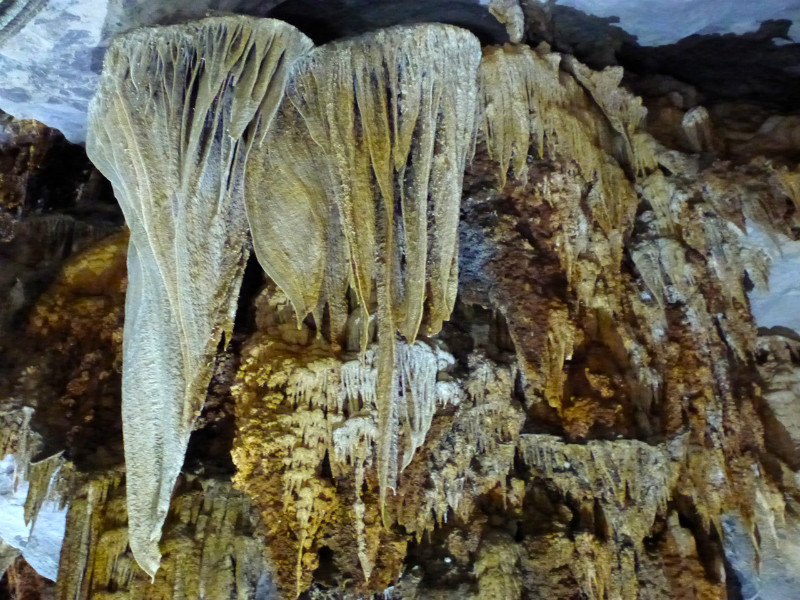 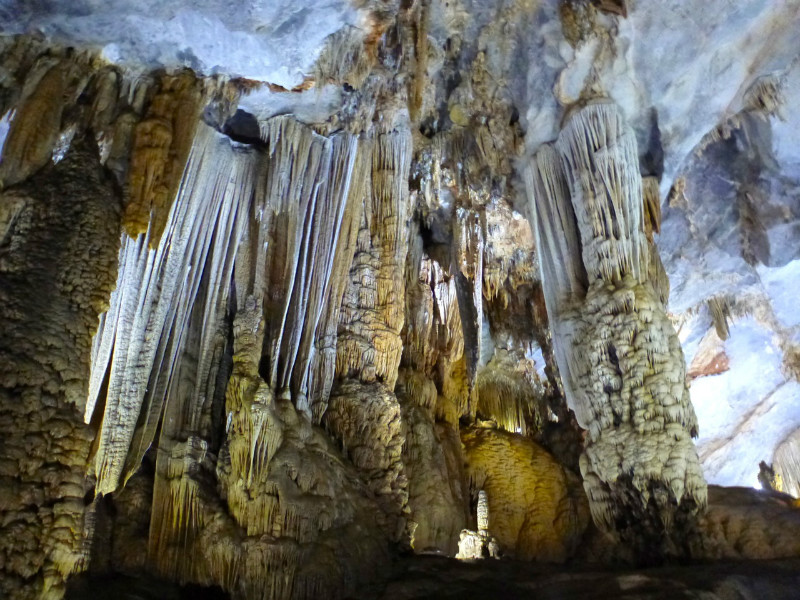 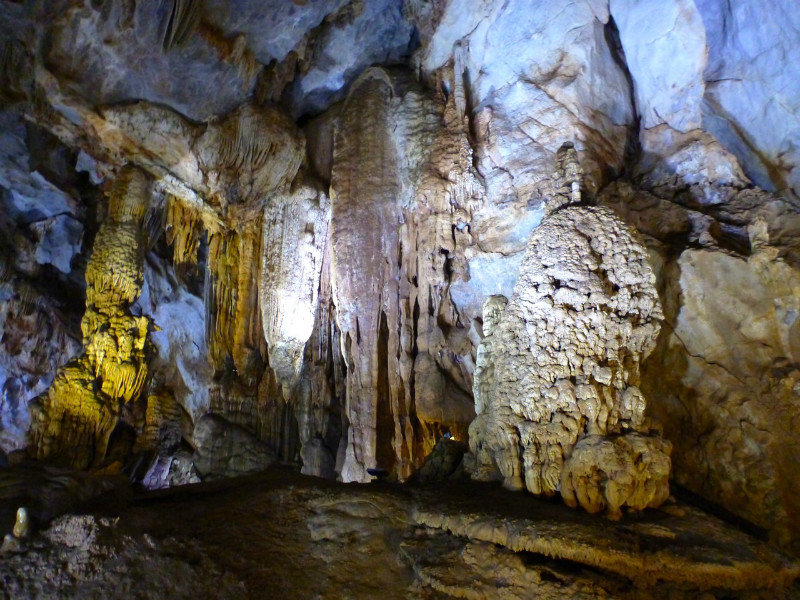 This one was supposed to look like an ancient Vietnamese house - I thought it was pretty cute: 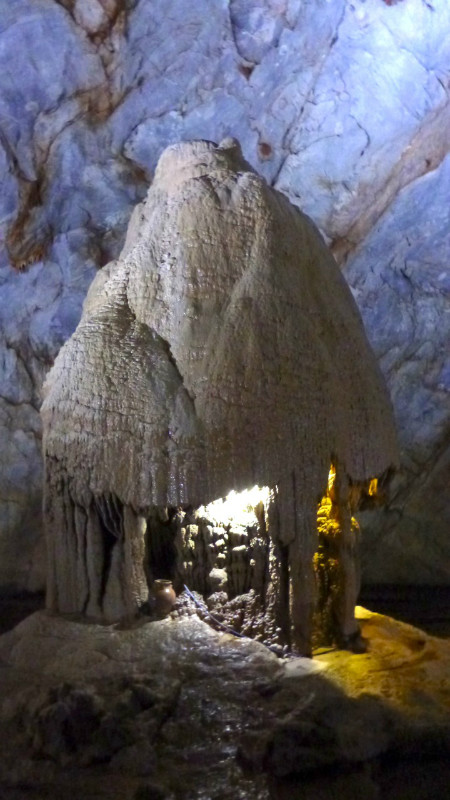 I also got a bit creative with the camera and the colors in the cave: 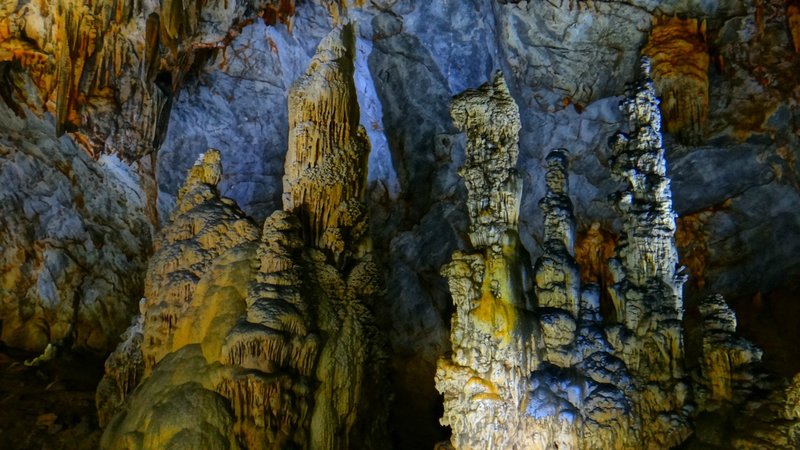 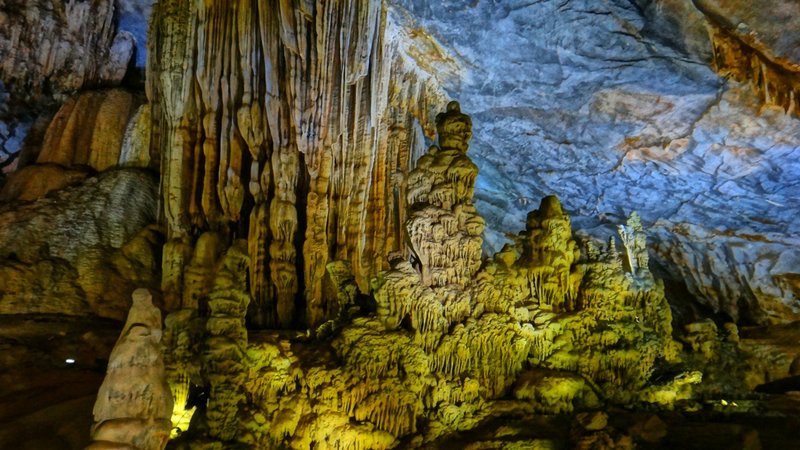 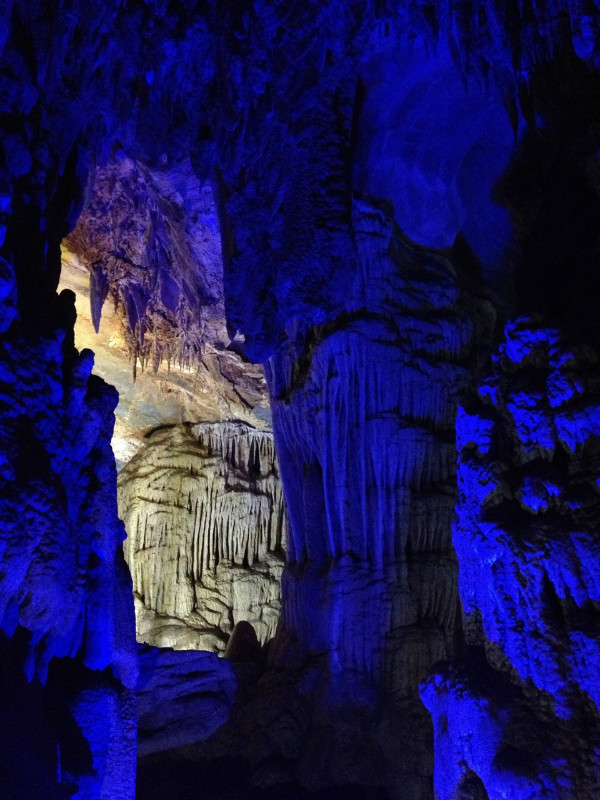 Here's a few to get a sense of scale: 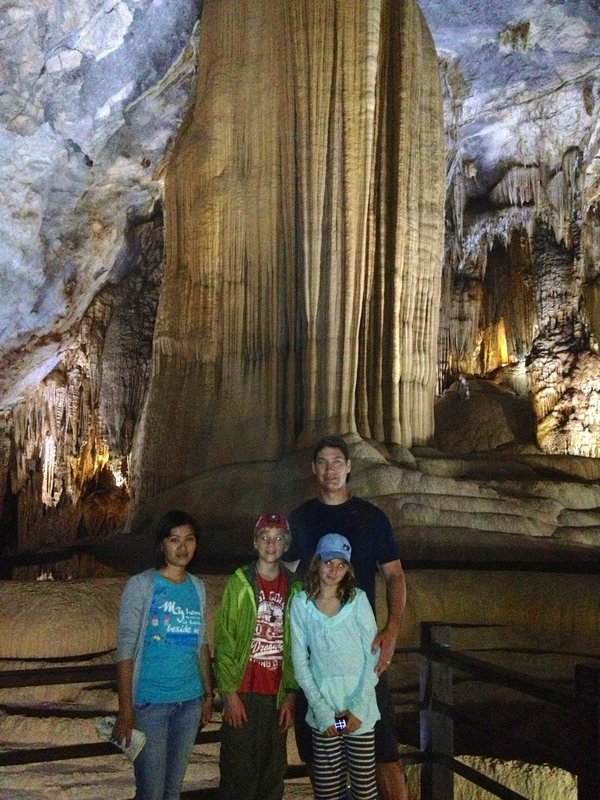 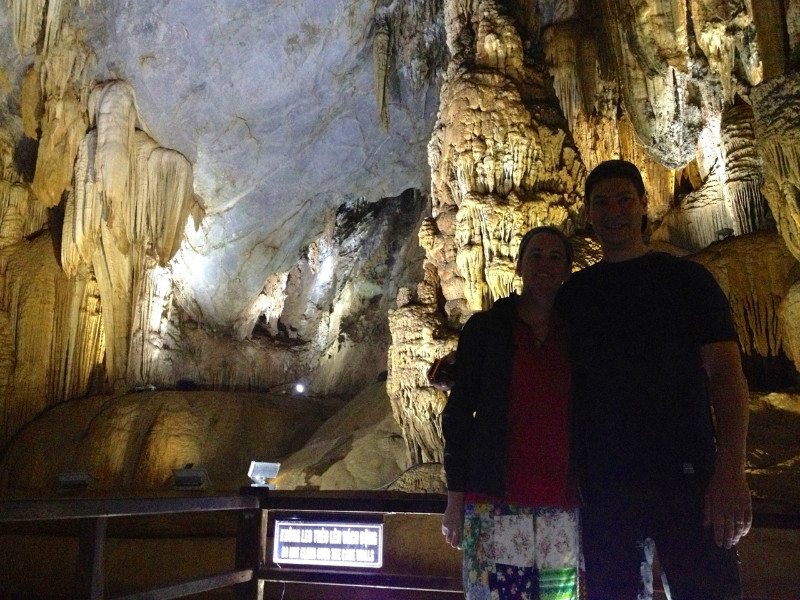 Finally, we got to the end of the path, and had a chance to sit down and enjoy the silence (right before a large tour group came through!) 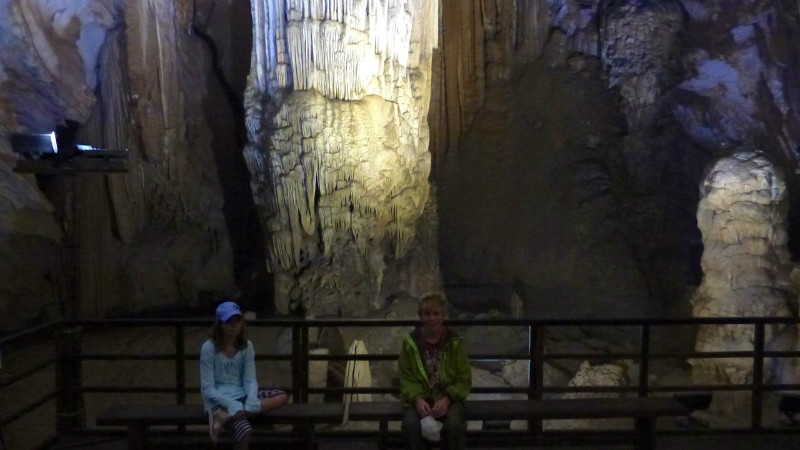 On our way out, we had a good laugh about all of the warning signs around. 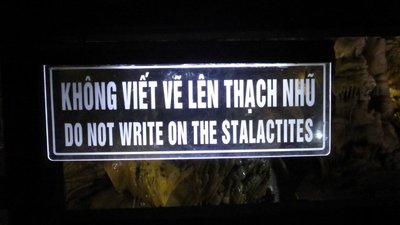 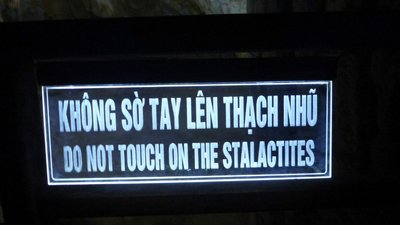 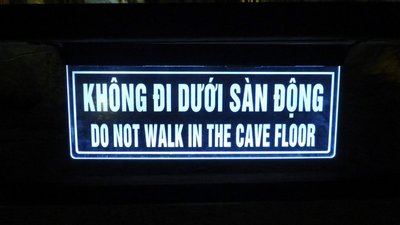 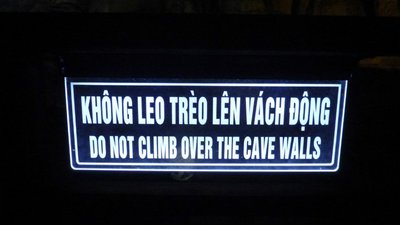 Jeez, they don't let you have ANY fun!

After we left Paradise Cave, we went into to town to have lunch at a local restaurant. Well, it was a bit more like the front room of someone's house, where the mom made us a full 6-course meal including fried local fish, braised local pork, morning glory (a local vegetable), rice (of course), and even french fries for the kids.

Once we had a rest to digest from lunch, we piled back into the car to go visit Phong Nha Cave. This cave is over 44km long, although only the first 1.5km is open to the public. The visitor center is located pretty centrally in the town, and offers a couple of options for exploring. We opted to pay a bit extra to rent kayaks and adventure through the caves ourselves (vs. on a boat with a bunch of other tourists).

Here we are walking up to the entrance of the cave (that's it in the river): 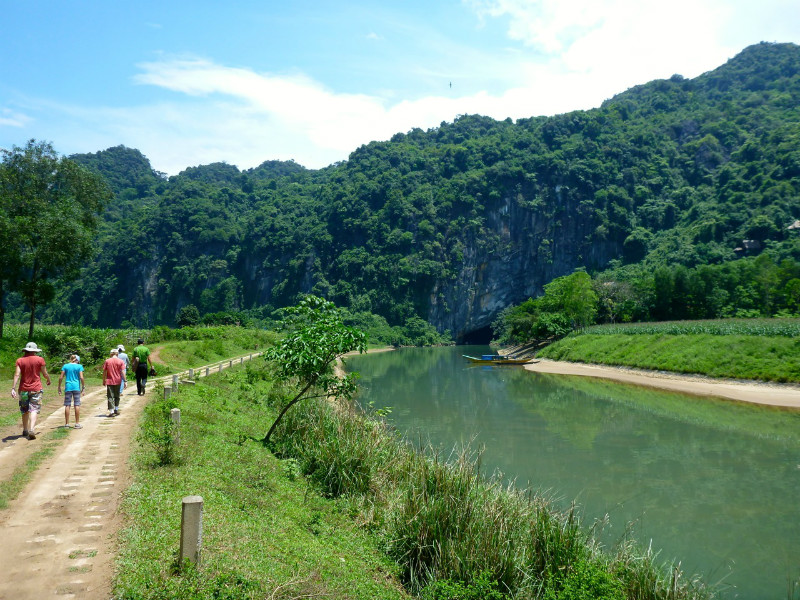 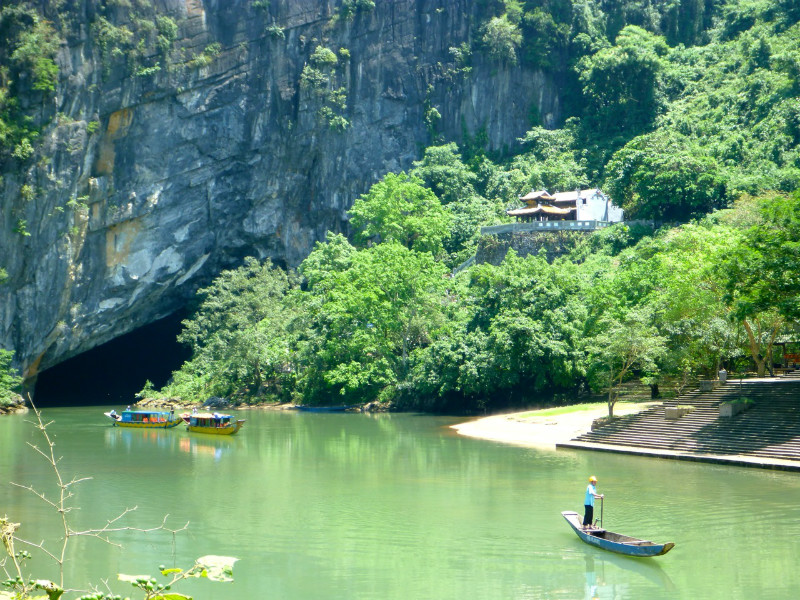 Once we got geared up with headlamps, helmets, and lifejackets, we got into our kayaks: 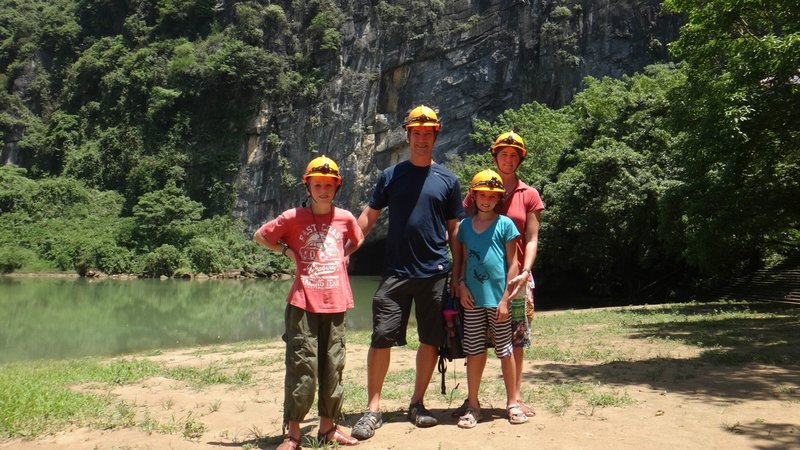 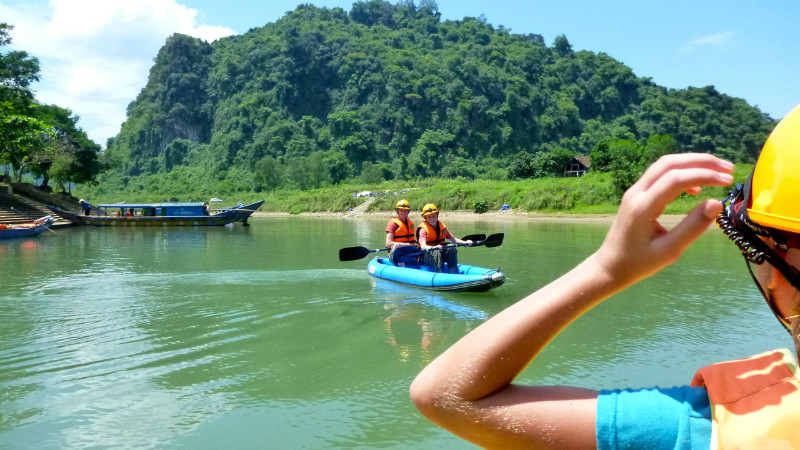 The kayaks were pretty hard to keep going in a straight line, but once we got the hang of it, we managed not to bump into the walls of the cave (and even got a couple of pictures in the dark): 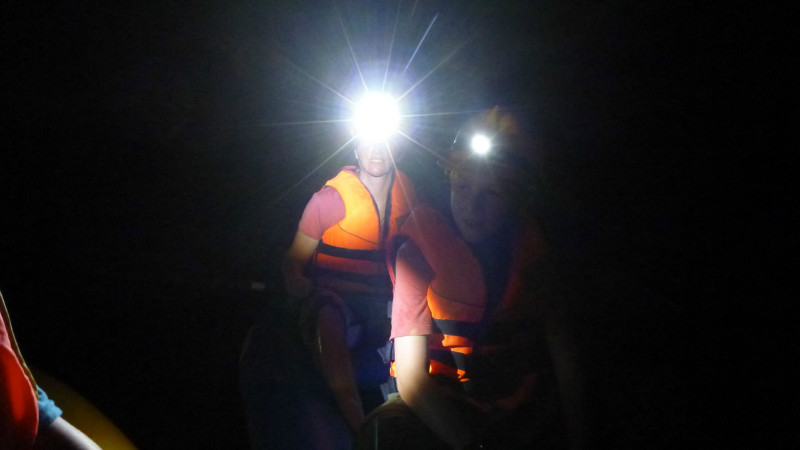 It took us about an hour to paddle all the way to the end of the cave, where we had the chance to get out and clamber across rocks and ladders to the far chamber. We tried to take some pictures, but it was very humid in the cave (not the mention dark!) and that made for some interesting shots... 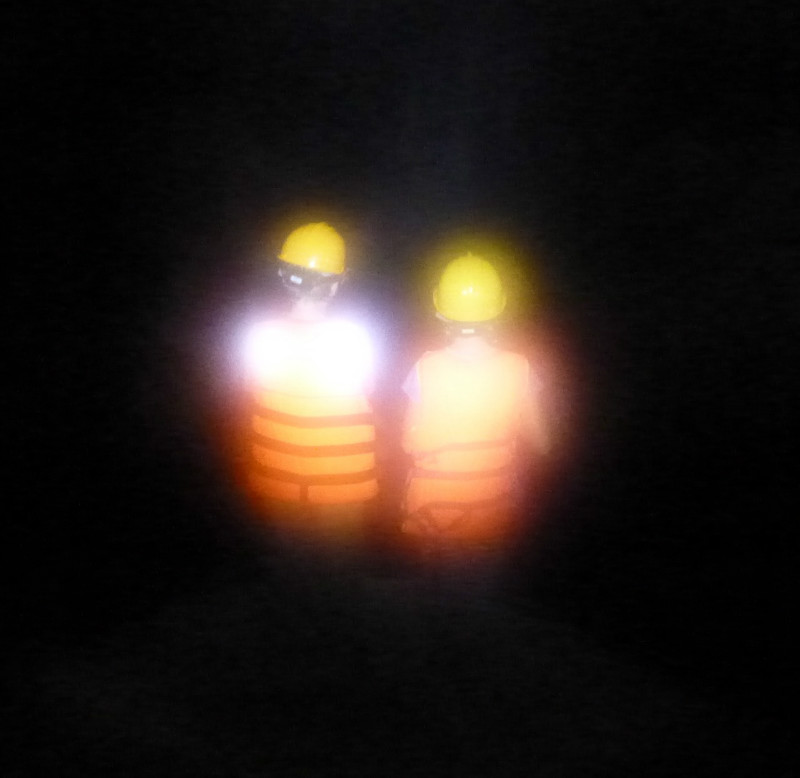 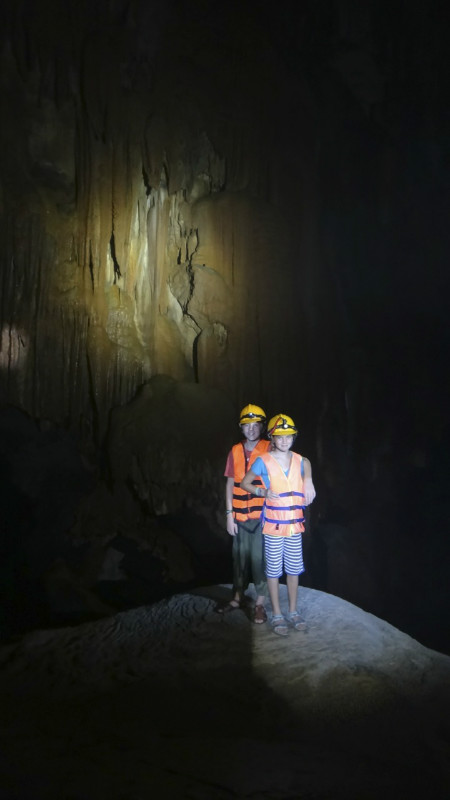 We then paddled out, avoiding the other boats, with a quick stop to a cave tube that had been used by ancient Vietnamese as a home, as well as by the Vietnamese army during the war. 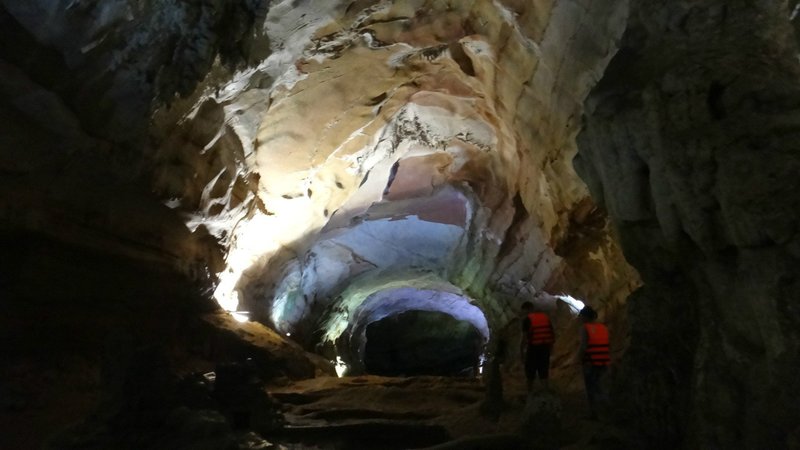 Tube inside of Phong Nha Cave

When we reached the end of the trip, we were tired and sore and ready to go home. It was a wonderful day, and a great adventure. We're already talking about coming back to Vietnam to do some longer cave adventures!